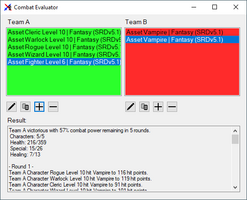 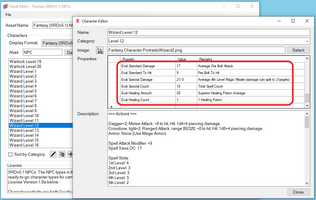 Although I've gotten better at balancing combat for my DnD players over time, it's still very difficult. I've found the monster "Challenge Ratings" to be mediocre guidelines at best. For a combat to be challenging the total challenge rating I throw at my players is usually double their player levels. There must be a better way...

Which is why I've been assigning standard damage attacks, special damage attacks, and healing information to all 240 character types this past month. Next month I will continue assigning the same values to all SRDv5.1 monsters. And all this information is for a new combat evaluator function.

The combat evaluator takes in characters' hit points, initiative, and the many new properties I've added to play out a mini combat turn by turn. I'll post a more detailed explanation later of how it works, but it looks quite promising!

I've attached a few screenshots of what the data looks like for the players and the still-in-progress evaluator form.